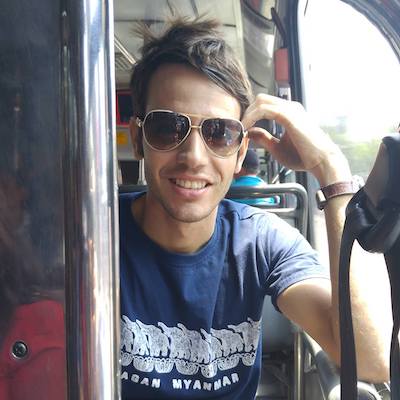 <em>Dustin (he/him) is an Urban Studies PhD candidate in Tulane University's City, Culture, and Community program. He studies mobility and planning in cities across the Global North and Global South to ask who is able to make and influence decisions and how.</em>

I wonder if you could start by sharing a little bit about your work and what you research? How is that grounded in your personal experience - or where did those interests sprout from?

The research I do, in academic terms, falls under the heading of urban democracy. But it started from, and I guess it’s still driven by, a question about who has the ability and the right to make decisions about the places that we live. A lot of attention has been given in recent years to the inequality of resources. You know, the one percent versus the ninety-nine, these kinds of things. So we are getting a better awareness of just how inequitably things are spread throughout society, and I think that’s definitely important. But I’m also really interested in this question of power - how is power spread? And to be honest, we can say that it’s just as or maybe more so unequally spread.

I first started seriously thinking about these questions probably when I was in India, living in Delhi, a city of twenty million some odd people, in which the vast majority are completely excluded from any decisions about their lives. In Delhi, you have some incredibly wealthy people, and the vast majority of people are not wealthy. Similarly in terms of power, you have a few politicians, a few elites making decisions while the vast majority of people are left out. These often go hand in hand, money and power, but I really decided to focus on the latter.

So it started from there, then I came to New Orleans in the City, Culture, Community program [at Tulane University], and began asking some of the same questions: how does this play out in the context of New Orleans? And in the context of urban renewal there have been a lot of major projects over the past few decades that have really decimated neighborhoods, or reconfigured them in dramatic ways. If we really trace the origins of those projects and those ideas, they came from a few powerful elites making decisions in their own interest, while the vast majority of people in the city, especially in those neighborhoods, were not only excluded, but in many cases didn’t even know about these projects. Here, we’re talking about [the bridge over Clairborne [Avenue]](https://www.wwno.org/post/monster-claiborne-avenue-and-after-interstate), or more recently [the UMC [University Medical Center] and VA hospitals](https://www.nola.com/news/article_6b956261-ab3b-5606-8a38-6752131bc071.html) that were built in neighborhoods not too far from where I live.

I also continued these questions in my own research in Bogota, where I framed these questions specifically around mobility and transportation. I think that’s another interesting layer of this, because mobility is about the places we are, of course, but it’s also about our ability to move through places, or one place to another through a city. So at the same time mobility is a really local issue, like is there going to be a bus station next to your house or not? But it also covers the entire city. So these projects are large-scale and small-scale at the same time in a really interesting way. In all of my research, to sum up what I’m looking at, it’s who has the right and the ability to make decisions. Often it’s easy and appropriate to refer to the scholarship and activism around the term ‘right to the city,’ which originally comes from [Henri] Lefebvre, but other people have carried on that tradition in various ways. And it’s also of course related to my own love of places. I’ve always been fascinated by places, by cities, by towns. The places I was living, the places I wanted to go - I’ve always thought in geographical terms, you know?

I love that. Continuing to dig a little bit into decision-making, and who has a right or access to it, what are some recent structures that are more accessible, or models of collective decision-making that seem promising?

In terms of participation and how people are getting involved in these processes, there are some top-down strategies, in which the government organizes and says we want to include people in the decision-making process. Some of the literature has really celebrated some of those initiatives, most notably participatory budgeting, which became famous in Brazil and other places in Latin America, and now even in some American communities. The other side is more bottom-up solutions, and that’s usually driven by activists or by community members who are able to organize and push for greater inclusion. And there are promising examples in both, but there are also unfortunately disturbing and troubling cases as well. For instance, when governments decide to use the language of participation, or create participatory spaces that are only meant to deflect criticism or check a box for inclusivity, without really shifting any type of power. To be honest that’s the type of research that I’ve done most on. There’s a wave of talk of participation in the last twenty years, but I don’t really see significant democratic shifts. I see a lot more language than action on this front.

That is troubling. Diving a little bit into the other piece of your work, mobility and getting around cities and urban space: what are some of the inequities that we should be thinking about there?

Well, I think these are pretty obvious if you look around a little bit. You can take a bus in New Orleans, and see who’s riding it and who’s not. There’s an anecdote that I like to tell - I’ll never forget it. I was at a [New Orleans] City Council meet-the-candidates forum or something like that back in 2017, before an election. The moderators asked a brilliant question, that if I’m ever in the position to moderate a debate I’m gonna ask. They asked all the candidates: tell us about the New Orleans city bus route that you know the best, and tell us about the last time you rode it. The first few candidates sort of danced around it - they said something about the streetcar, how they took it because they had some friends in town or something like that. But then one of the candidates was like: I’m not gonna bullshit you guys, I’ve never taken a bus in New Orleans in my entire life. And then another candidate agreed and said the same.

So how we get around is definitely heavily linked to our socioeconomic status, which often also overlaps with race and ethnicity. The few times that I’ve taken the bus in New Orleans I’ve definitely been the only white guy there. It’s mostly African American and Latino riders. I’ve found similarities wherever I go, whether it be India or Latin America. The exact characteristics may be a bit different, but you find generally the wealthier or more elite people are, the more options that they will have, and the better access they have to jobs, education, and leisure. There’s an organization here called Ride NOLA which puts out reports that show the difference in access. If you have a car in New Orleans, you can reach 89% of the jobs within thirty minutes. If you don’t have a car and are transit-reliant, you can reach only 12% in that time [according to the 2019 report]. For me, New Orleans is a very small city, after having lived in places like Delhi and Santiago, Chile. Everything is 15 minutes at most, because I have a car. If I don’t have a car, then it’s 45 minutes to an hour to get from one place to another. Or maybe some places are not even accessible at all. So these are just some very obvious disparities in terms of access.

And then we also should consider, now that we’re in hurricane season, the safety that mobility can often entail as well. If we go back to a historical case like Katrina, there were some people who refused to leave the city and decided to wait it out, but there were a lot of people who were not able to because they didn’t have reliable transportation. If a really serious hurricane comes here right now, I’ll get in my car and I’ll drive away and I’ll be fine. But for a lot of people, it’s definitely not that simple.

One last question that’s maybe a little bit more fun. As you mentioned, you’re a lover of places. I was wondering if you could talk about one particular place that’s significant to you in some way?

That would have to be - there’s a bird sanctuary in Rajasthan, India, called Bharatpur, which I try to go to every time that I’m there. I’ve probably been five times now. It’s the wetlands, with a long dirt and concrete path down the middle of it where you can ride a bicycle or walk. And on each side you have fantastic wildlife: all kinds of birds, migratory birds from all over the world. Also monkeys, antelope, a few pythons which I’m not so crazy about, deer, wild dogs, maybe a leopard, though I’ve never actually seen one. It’s a really amazing place where you always see something different, something new. And it’s super chill and peaceful. I’d say that’s one of my favorite places in the whole world.

Questions for Reflection: What are your thoughts about people's agency to make decisions about the places that they live? What are some ways this dynamic could be improved in your own local context?