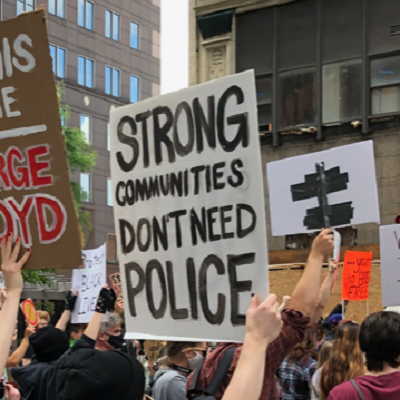 <em>The Place/Love Project is taking a break this week from posting a normal interview to instead post a collective one. The following quotes were collected from about a dozen anonymous people at the #JusticeforGeorgeFloyd demonstrations in Pittsburgh, PA, on Saturday, May 30th. For their safety, no names or photos were collected.</em> <em>The intention of this blog is a humanist one: to spotlight an ongoing series of people, real people, and find out how they seek to better their neighborhoods and re-imagine their communities. The media narratives around these protests have been particularly de-humanizing: looters, rioters, thugs. They showed up for no reason other than to cause trouble; they are an angry mob with no discernable demands. But the words of these demonstrators, a small snapshot of which are assembled here, show quite the opposite. Their reasons for being out on the street were numerous and well-founded; they were able to provide reasonable and actionable requests.</em> <em>I didn’t go to the protests to create this blog piece. I went to protest, and ended up having these conversations while I was there. What I witnessed were incredible acts of community-building, despite overwhelming media focus on physical destruction. Why? Because as I've been reminded by several think-pieces and social media posts, militarized and oppressive police harm our communities. Place/Love is about the opposite - strengthening communities. Showing up for our neighbors is always necessary, and sometimes, that takes the form of direct action.</em>

Why was it important to you to show up today?

Because America has a huge problem. I think the pandemic made people forget that the biggest crisis that we have in America will always and forever be racism. So I think it’s important that even in the midst of this, a lot of us are sacrificing our lives right now because of this disease. But we still can’t let that overshadow the fact that black men are getting murdered in this country more than anybody else, so it was really important for me to be here.

I mean, I don’t think that the normal methods of change are working. You know, voting booths, they’re good, but they’re not the only way that we can make change. And filling the streets with a little bit of civil unrest, that’s how this country was founded, and I believe that’s how it’s gonna progress.

This is really a sign of solidarity that all people have come to the conclusion that wrong is wrong, and they don’t mind stepping out and expressing that. And it’s important that that is expressed by all peoples. Regardless of what your color, your race or nationality, it’s just so important that we stand together when we see such evil.

Well, it’s important because no matter what, these things keep on going. The killings, the murders. Not just against black people, especially people who are minorities who are still in those camps. Immigrants who are trying to seek asylum and they’re in those camps and they’re incarcerated. Most of them are dying from COVID-19. Along with other problems that are taking place, that’s why I’m marching. And the other thing is to encourage people to get out and vote, because Lyndon Johnson said something in his campaign years ago, in 1964, and it’s true today. The stakes are too high for you to stay home.

It’s never right to kill anybody. That is indefensible.

To enable black voices to be heard.

I think everyone should be out here. The anger, the injustice, it’s gotta be now.

It was the only thing I could do.

How do we build our communities to resist white supremacy?

Well, I think first and foremost is some sort of independent, civilian governance of the police. You know, having a board of civilians that come in and look at cases independently and figure out whether or not those are prosecutable and how to move forward. So often these things are looked at internally in this fraternity and thrown out before it ever gets anywhere. But as far as change on a mass scale, you know, term limits. Politicians are career politicians - they don’t seem to really care about the people or what they’re saying. Gerrymandering needs to stop. We need to get these districts representing the people the way they are. Campaign finance reform is huge. Our politicians are beholden to the banks. And I think that training,realtraining of the police, with oversight, is also necessary. You know, I worked with social services for a decade and we were trained to de-escalate first. We didn’t have weapons, we didn’t have anything. We were just taught various methods to de-escalate first. And these cops shoot first and ask questions later. It’s never gonna change unless they’re held accountable. And they’re not gonna be held accountable until we can get back power to the people. And that’s not gonna happen unless we figure out a way to turn over these politicians regularly and hold them accountable as well.

You know, we need to come to the table. They talk about diversity and training. They don’t need to have PhDs in training, they need to have regular people who are being affected by this. But we do need to come to the table, and we do need to appreciate people for their particular culture. Two or three Africans Americans or two or three Jewish people standing in the corner doesn’t mean that they’re standing there and gonna cause problems. It’s a matter of people loving to be in the company of other people, and that should be something that we should celebrate. The fact that people are still communicating with one another. We often talk about the cell phones, everyone’s on the cell phone, no one has the time to talk, straight up. But when you see a crowd of people, like in the barbershop, you see people congregating together, we should appreciate that, instead of running away from that or trying to discourage that. So the importance of this is just to show that we really do care as a people about one another. We don’t always have the time to express it, because of technology. But it’s beautiful to be able to do this and come out and say, we care about each other.

White people, they’re the ones who have to change. It’s the white people that have to have a voice and call it for what it is, you know? It doesn't make no difference that we - people of color - are the ones who are being oppressed. The oppressor has to be the one that makes the change.

I think there’s room for awareness heightening around unconscious bias. I think that’s a start, just finding the awareness and dialogue. It seems so insurmountable, but I try not to keep my mind there because it depresses me.

Well, looking at the criminal justice system. I don’t know, this alleged counterfeit twenty dollar bill, you know, and then there’s senators that probably did some insider trading right at the beginning of the pandemic for like millions of dollars and this man dies over an alleged counterfeit twenty dollar bill. It’s really ridiculous, it really really is. And then, we really need to do something with housing. We can’t be living separate from each other anymore. So, equitable housing. All those social determinants, they’re all there.

Do you think that the police should have any role in our communities, and if so, what should that role be?

That role should be people and police working together to stop crime. Not only stop it, but you know, reduce it in such a way that there’s trust between people and the police force. And the things is they should really hire a lot more minorities. Black, as well as Latino, so that way they can at least relate to the community and that way you can help to reduce crime. That’s one thing that’s not happening. And the other thing about it is, police should work within their ranks to get rid of the rogues. Because this Derek Chauvin, the one who killed George Floyd, what happened was there were other police violations against him, and they didn’t bother to check on them. But now that he’s taken a life, the thing is now we have to check on him. The thing about it is if they had checked on him earlier this would not have happened.

What are some of the things that need to happen right here in Pittsburgh to get rid of white supremacy?

That’s a big question. I think it needs to start with white people thinking about what role they’re playing in the injustice that’s happening and furthering white supremacy, in Pittsburgh and around the country.

It’s not just a city-by-city thing. It has to happen over the whole country. You know, white supremacy is incredibly ingrained in our institutions and our society. It’s everywhere. In Pittsburgh specifically, as I think is in most cities, we need more accountability for the police force because more often than not, they are the part of the justice system that is enforcing the racial injustices on black Americans every day. The police chief released a statement about George Floyd and he said things about evaluating our training and using this to make sure that our force is acting the way it needs to be. I think that’s a good start. I think there just needs to be accountability and people need to start caring more, honestly. I think a lot of people are okay with kind of just ambivalence about the situation. I think that has to change, and we as a society have to focus on caring more.

I strongly encourage you, if you are able, to financially support black-organized coalitions and efforts. Here a just a few examples, the first two of which focus on Pittsburgh specifically, because that's where these interviewees are: Bukit Bail Fund, this bail fund organized by Jail Break, and a Minneapolis gas mask fund. Please, stay safe as you show up.