On Preservation and the Archive 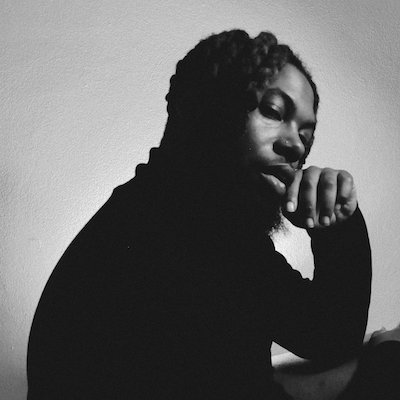 <em><a href="http://shabezj.com/">Shabez</a> (he/him/they/them) is an interdisciplinary artist from Kinloch, MO, whose work interrogates physical, political, and social-economical space by using queerness, not as a means of speaking about sexuality, but as a catalyst to challenge varying power relations. Now based in New Orleans, he is an MFA candidate at Tulane University.</em>

Let’s start out kind of open-ended: could you share a little bit about Kinloch?

I was never a great history buff or anything like that, but I do know that Kinloch [Missouri] was one of the first Black communities that was founded in North Saint Louis County, and it was the first one West of the Mississippi [River] to be incorporated as a city. So that has specific weight on the way that I like to think about where I’m from, because it doesn’t necessarily look like a place that has this history when you first go to visit it. It was a modest town, but it was grand to the people who lived there, I’ll say that. It had its own movie theater, it had its own fire department, it had its own police station, and all of those things were first for that community and first for any West of the Mississippi.

Kinloch was forged because of segregation. Kinloch itself as a community was mixed-race, at first, and the school district is what kind of initiated the segregation. It was [a case] that was before Brown v. Board of Education that caused conflict within the community, and the community of Berkeley separated from Kinloch. And so that’s when it became primarily Black. From there, Kinloch was a sustainable community. It's really close to the airport, and was a community that was around 8,000-10,000 people - until the late [19]80’s and 90’s when the airport started to expand and started to displace people from Kinloch into neighboring communities like Berkeley and Florissant and Ferguson - Ferguson and Kinloch share a border. And then the Great Recession happened in the 2000’s and the expansion of the airport had dissolved, so all of those plans that they had for that land - they did nothing to it. All of those places that used to be homes and community centers and schools and movie theaters, they now just sit desolate, if they even exist at all. What was a city of 7,000 people as late as the late 90’s is now a city of 290 people. People like Dick Gregory are from Kinloch, and Jenifer Lewis and Maxine Waters are from Kinloch. There’s a slew of great elders who are from this place, but the place doesn’t really get a lot of acknowledgement. Once the Mike Brown incident happened in Ferguson, there were more eyes on Kinloch, specifically because of how Saint Louis County is segregated into all of these different municipalities that don’t make sense anywhere other than Saint Louis County. So that’s a brief history.

My own personal work and my personal journey with Kinloch comes from my family. I didn’t live in Kinloch until 2011 when my mom and I moved into my great-grandmother’s home. But I was always there on Sundays because we went to the First Baptist Church of Kinloch up until I was like 15 or 16 and I could make that decision for myself. But I would always be at my grandmother’s house after church, and I was part of the community even though I didn’t really grow up there. And so moving back there and being in and around the community from 16 up until my adult life, I started to do research on the city and realized, damn, I live in a very important place, an important place that is not even recognized within my own immediate community, let alone on a national or international scale. But I live in a very fucking important place, and these people are important, who live here now and who are from here. So a lot of the work that I do now is uncovering that community and uncovering the stories that existed within that community and recognizing the importance of the people who came from there, who may not be Maxine Waters or Jenifer Lewis or Dick Gregory but still are exceptional and extraordinary people whose stories deserve to be told - and more specifically, thinking about my grandmother and my grandfather who inhabited this space.

What do you find you’re uncovering, particularly with Kinloch experiencing this mass displacement?

I’ve worked closely with a good friend of mine, her name is Alana and she’s working on a documentary about Kinloch, called the Kinloch Doc. We always talk about the name Kinloch, and the fact that the word ‘kin’ is in the name. How within this community, no matter who you are, if you know someone from Kinloch or if you are from Kinloch, you just need to say a family name and that is a way of identifying or signifying that you are from this community, and you are a piece of the fabric of this community. It wasn’t the name that was given to it by the Black folks that lived there, that was the name that was given to it by the white folks who were first in the space. But the fact that kin and family kind of makes up the fabric of this space I think is the most beautiful thing about this community, because it literally is that. It’s a bunch of families who stayed there and cultivated this town and this city to be what it was, and it’s these families who were displaced.mI think that’s probably what I’m most drawn to that I’ve uncovered when doing this research on this town.

Wow, there’s a lot in here to talk about. How does all of this relate to you as an artist? I was looking around your website and saw your collection of pieces titled ‘I came back to visit. When I arrived no one was home.’ That seemed like a pretty direct connection - how else has it shaped your artistic identity?

A lot of my work is self-portraiture, and when I would go back to visit these images of my grandparents I would never see myself, and I would never see the Kinloch that exists today. What it’s inspired me to do is create a body of work that juxtaposes these images from my grandmother’s album, and these images of Kinloch’s past with where Kinloch is today and where I am today as an inhabitant and as a citizen of Kinloch to tell this true story. Also just to build this narrative of Kinloch’s history through this Black queer body, and this black femme voice of my grandmother, both voices which aren’t really heightened or visible in the story of Kinloch. And so I think that’s how it’s most shown itself within my own artistic practice, just lending itself as an inspiration to the work that I want to create and the stories I want to tell. 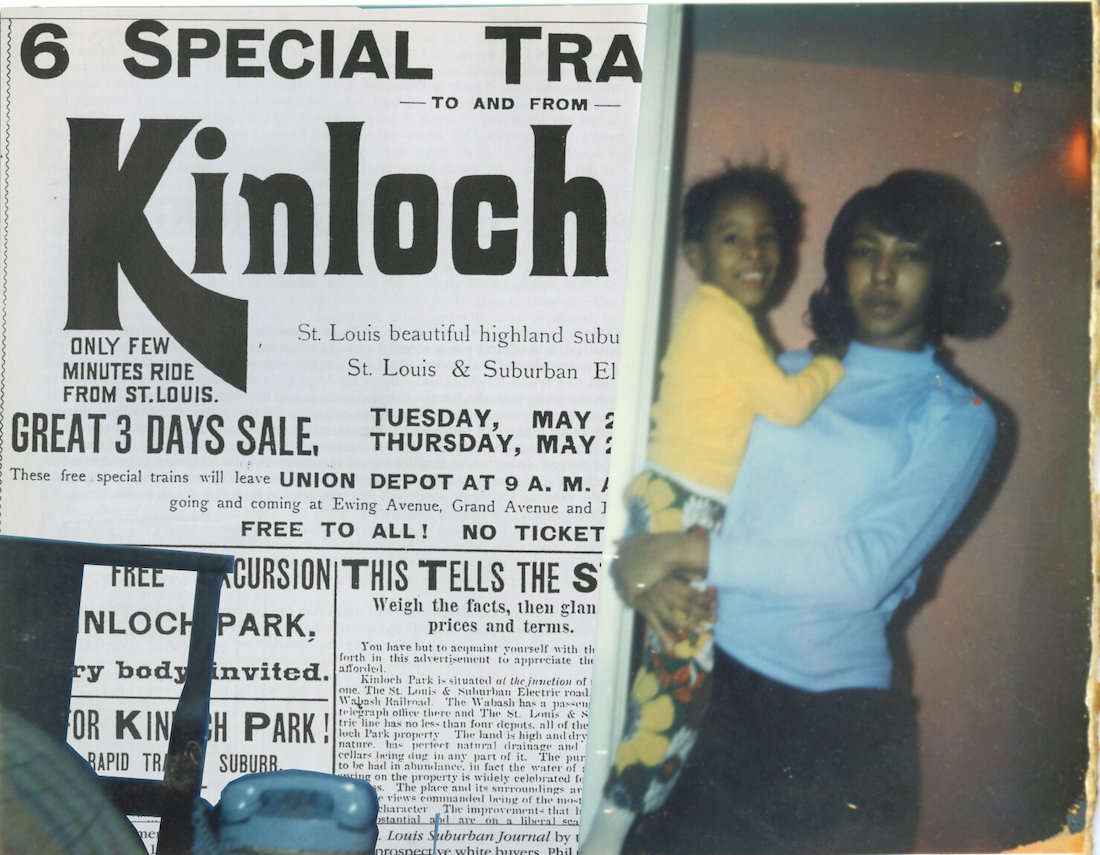 It’s interesting - I feel like when I was growing up, Saint Louis was a very under-the-radar city in the general contemporary American story. And then I feel like Ferguson brought so much attention to particularly Black communities in Saint Louis, so it’s always really interesting to hear more. Do you find that narrative to be true, and if so, how have you found things have changed since this large national event that has really brought a spotlight to Saint Louis?

I think for me in particular, I wasn’t really young when Ferguson happened, but up until that point, the way Saint Louis operated was the normal for me. I had no idea that what was happening in that city and the way the police operated and the way the government was structured - I had no idea that that was at all un-normal. I thought that’s how all places were. I thought it made sense to have ninety different police organizations within twenty miles. I thought that was normal. And so to read on the news, on the New York Times or the Washington Post, about the organizational system or governmental structure within Saint Louis was eye-opening for me - to realize that we had been living in such a police state. And so I think the narrative that came from Ferguson, especially being on the ground and being around activists and folk who were actively making change, was like: Oh no this shit is not normal. We should not be living like this. We should not be scared to go to certain communities, we should not be scared to drive on certain streets after certain times, you shouldn’t have cousins with warrants in twelve different municipalities who go to jail. That shouldn’t be the norm. I think it was eye-opening. I’m grateful for the awakening since that incident happened. And I think something about Saint Louis being a catalyst for this movement has also been something that has resonated with me that I’ve yet to be able to find the words for. But I’m grateful to have been at the epicenter of that movement, I will say that.

From what I’m seeing from me and Alana and others: I think it’s preservation through the archive and creating new archives through the experience of Kinloch, because we are under the understanding that Kinloch will never come back to be what it was. Most of the homes have been demolished, most of the streets have been pulled up. Right now it’s going through this moment of being industrialized, so there are a lot of factories being built now after sitting vacant for twenty years or so. We know that the fabric of the community as we are familiar with it will never come back, and so what all of us are actively doing is trying to preserve it through the archive, preserve it through the people that live there and understand that the community is still there. Every year they have a reunion where my grandmother and my grandfather go to the Kinloch reunion and meet up with their old friends and schoolmates and teachers and folks who actually made the community, and a lot of them are dying so it’s up to us, their grandchildren and great-grandchildren, to preserve this community as best we can. And because most of us aren’t from there and didn’t grow up there, the best that we can do is create new visual imagery to preserve this community. So I think that’s the best way that we can go forward with making sure Kinloch is preserved.

Questions for Reflection: What are the important stories to preserve and archive around you? How can you carry this out in your life and practice?