On Not Just Selling Stuff

Anthony in Parkchester, the Bronx 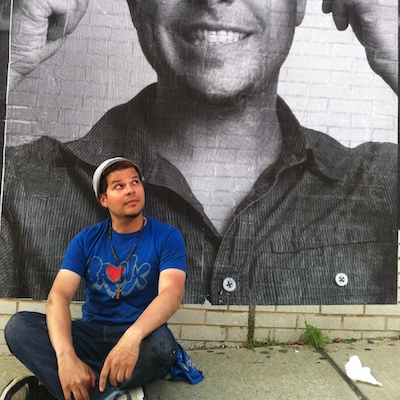 To start, I’d love to know a little bit more about you and your story: where it all started, where it is now?

Around 2006, I was working in the South Bronx at an after-school program. And a friend and I were looking to decorate our offices with Bronx stuff. We’re in the Bronx, we’re both from the Bronx, we wanted to decorate our offices with Bronx stuff. And we realized that none of it existed. I was hoping to give high school students a sense of their community, of where they’re being raised, and he was just looking to display his Bronx pride. We couldn’t find anything besides some Yankees posters and Rumble in the Bronx posters with Jackie Chan... which I think was filmed in Vancouver.

One day over lunch we decided that we were gonna make our own. And that’s how Mainland Media was born. Our mission was to create positive, Bronx-themed merchandise. After a couple years, we changed the name of Mainland Media, of our apparel website, to From the Bronx. So we sell Bronx-themed apparel at FromtheBronx.com. We were doing pop-up shops all throughout the Bronx, in historically significant locations. We’d sell our merchandise, we’d feature local artists and sell merchandise from other artists. One of the last ones that we held was eight years ago at the Arthur Avenue Retail Market - and it went really well. We had a huge turnout. It kind of brought a little life to the Arthur Avenue Retail Market, which had the same vendors and the same clientele for eighty years. And they came to us, they said, “Hey, we like what you did here. What would you do if you could stay?” And we said, “Well, we’d open a beer hall.” Beer halls are inherently communal spaces - you’re kind of forced to sit down and get to know people that you wouldn’t normally talk to, even though they live in your community and live in your neighborhood. [If you'd like to read a past interview that digs further into the importance of neighborhood bars, click here]. And that’s how the Bronx Beer Hall was born. The Beer Hall opened seven years ago, and has been - knock on wood - pretty successful. We’re still in business.

Then we partnered up to open Taste of the Bronx, which is - which was before quarantine - a pop-up market and a quarterly subscription box that features Bronx food. And last year, after working with the Beer Hall for so long, we realized how hard it is for small businesses to get a leg up and figure out how to operate or how to reach their target audience. And so to bring it full circle, all the way at the end, Mainland Media is now our consulting wing, so we still do consulting with small businesses and non-profits and other people trying to target audiences in the Bronx.

How has the Beer Hall and Taste of the Bronx been doing, with the pandemic? Or how are you feeling about things?

I’m tired, to be honest with you. We’ve had to pivot, and we’ve had to figure out how to at least stay in business until we can operate like we normally did. The problem of having a business so focused on community - especially Taste of the Bronx and the Beer Hall, the idea was we bring people together, and now we can’t bring people together. So we have to get creative in how we do that. At the Beer Hall, we’re focused less on our draft beers and more on our take-out. So we pivoted from a bar to more of a bottle shop / can shop. And because we are all about our community, we are still trying to host some virtual events. We’ve had a couple DJ events and some parties online, on Zoom and on Twitch.

For Taste of the Bronx, we had a quarantine box that came out. If you look out our Instagram, we’re not promoting our monthly market, so we’re really promoting the businesses that would normally attend our markets. We’re just trying to help them spread the word about the things that they’re doing. And then with From the Bronx, we released a summer activity book that parents could do with their kids. It’s a coloring book about a Bronx summer.

So it sucks to have to kind of reinvent yourself, but we’re always reinventing ourselves, so it’s also a way to keep us on our toes and keep us fresh.

Thats’ awesome. It’s amazing to me how many different great ideas y’all have! Pivoting a little bit, what neighborhood are you from?

I was born over by like, 149th [Street] and 3rd [Avenue], which is the Hub, more Melrose, South Bronx. I was born there, and then our family moved between Parkchester and West Farms, right at a weird border, but walking distance from both, you know? And depending on who you ask, we’re Parkchester... but when I vote, I’m not voting for people in Parkchester! I grew up around there and I still live in the same area.

Nice. I’d love to ask if you could talk a little bit about the Bronx and the Parkchester area. Could you talk about it through your eyes, and your experience?

Sure. When I think about the Bronx as a whole, I always say two things. First, the Bronx is New York City’s proudest borough. I went to school at Columbia [University], so I wasn’t far from here. But when I said I was from the Bronx, the reaction was always: “Oh my god, how dangerous was it growing up? How’d you survive? Did you have running water?” There were really negative things attached to it. So we say that it’s the proudest borough because there is this misperception in the media that the place is still burning and terrible. It’s the proudest borough because we’re proud of where we’re from. The Bronx makes us who we are. I personally can tell when a person’s from the borough by the way they carry themselves and the way they speak. There’s a real sense of community.

The other thing is that it’s a really big borough. I had a scholarship, and I went to a [high] school called Horace Mann in the Riverdale section of the Bronx, and that’s an incredibly wealthy school. They charge somewhere between like $45-50,000 a year from kindergarten all the way through senior year. And it’s a completely different world over there. They never said they were in the Bronx, they always said they were in Riverdale. And now, as they’re becoming more involved in the community, and we actually have done some consulting with them, they are now proudly saying: Yes, we are in the Bronx, New York. They’re not shying away from our location and who we are. That’s one thing I always think about. When we were starting our company, one was for our own selfish reasons - we wanted positive representation for the borough. But because I was also working with young people, I think it’s important to feel good about where you’re living and have something positive to contribute to your surroundings. If you’re always surrounded by something that’s negative, it takes a toll on you. And you grow up with a chip on your shoulder. We’re hoping that in some small way, we could help young people feel good about their surroundings and their community, and show them that the Bronx is as rich with history and culture as any other borough, or any other city in the world.

Are there some neighborhoods that are better than others? Absolutely. That’s any city in the world. Could some places use some improvement? Yes, absolutely. It doesn’t mean that those places have bad people. Our goal is to focus on the positive, but we don’t ignore the bad or negative things. We always, especially on our Facebook pages, do the best we can to share stories that bring up issues that are happening, so people have a forum for discussion and the ability to talk about it. So we’re not just selling stuff, we’re also giving people a place to discuss what’s happening in the Bronx.

That’s awesome. One last question, knowing that at least two of your initiatives are food and drink-focused. What are a couple of your favorite hidden gems, restaurants or bars in the Bronx?

Okay, trick question. Best bar in the Bronx is the Bronx Beer Hall.

It’s number one, hands down, and I’ll tell you why: it’s not because I’m a huge beer drinker, because I’m not a huge beer drinker. We’ve done a very good job of creating a safe space where everyone is welcome. That’s why I say number one, because I grew up here, I’ve lived here my whole life, I’ve gone to bars and restaurants throughout the five boroughs, and there are places you go into where you feel like you don’t belong, that you’re not welcome. And I feel like we’ve done a very good job of creating a space where everyone feels welcome. So it sounds like I’m bragging, but I’m actually very sincere about that.

But! Number two, actually one of my favorite restaurants happens to be in Little Italy, it’s Roberto’s. There are other restaurants on the block that I like, but in terms of food, in terms of quality, in terms of ambience, Roberto’s is a killer restaurant. Better than any Italian restaurant in all of New York City, hands down. And then there are a couple of places near Parkchester, one called Step In. It’s been there my whole life, I’ve always seen it, and then I finally got to an age where I could go in it. It’s a cozy little bar. It’s relaxed, it’s a cool vibe. I could keep going...!

Maybe another time! Your answer was perfect. And I agree with you, as someone who has been to the Beer Hall many times. What always impressed me about it was that I went as a Fordham [University] student, but I like that it wasn’t like the other bars in the Fordham area that were exclusively catering to students. It really was a place where you could be with the rest of the Bronx community, and I think particularly at Fordham that was really rare and always appreciated.

Those are my questions! This was an awesome conversation, I really appreciated hearing all of this.

Questions for Reflection: Did you grow up with pride in where you lived? Were the images (in media, the news, etc.), overall positive or negative? How did that influence you personally?

As always, feel free to send your thoughts to placeloveproject@gmail.com. Also, you can sign up for our weekly mailing list by clicking here - this is the best way to keep up with new Place/Love interviews, essays, and more.