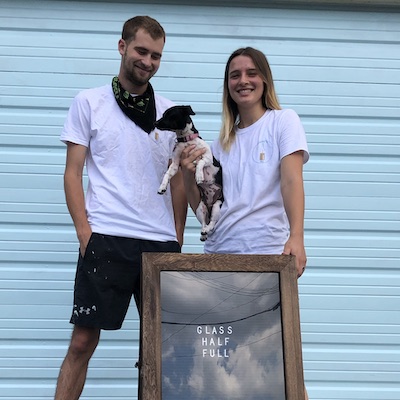 <em>Franziska is the co-founder and co-director of <a href="https://glasshalffullnola.org/">Glass Half Full</a>, a New Orleans-based initiative that recycles glass waste, converting it into sand to be used for restoration of the Louisiana Gulf Coast. The City of New Orleans does not provide glass recycling, meaning most bottles end up in a landfill.</em>

I’d love it if you could start by talking a little bit about Glass Half Full: what it is and how it got started?

Sure. Glass Half Full, at its core, is a community recycling center where we currently recycle glass, and we turn it into sand using a glass pulverizing machine. Well, we actually turn it into what’s called cullet, which is crushed glass, and we filter out the large glass pieces from the smaller ones. With the smaller stuff we make sand and sandbags. Then with the bigger stuff, cullet, we’re looking into using it in flooring and some commercial uses so we can fund where we want to use the sand, which is ultimately for coastal restoration.

And then how we got started is Max, the other co-director, and I, we’re Tulane [University] students. We were so fed up with the city recycling, or lack of recycling, and we were like, okay, we’re either gonna leave and not do anything about this, or we’re gonna try and do something. We started a GoFundMe that was like, let’s make glass recycling happen! Let’s see how it does. And we raised $17,000 to date. But naively we thought that was all the money we were going to need, and it turns out we need so much more. We’re gonna do a Kickstarter soon. But that’s how we got started.

That’s amazing. Did you have to buy machines... or do you rent? How does that even work?

Originally, the GoFundMe was for a machine. So we raised the money, we got the machine, and it came in and we were like: Oh no, it’s way too slow. It was meant for people who want to crush glass in their backyard for fun, not people trying to bring an entire recycling program to a city that loves drinking beer and wine.

So we just got another machine, and that’s bringing us up to speed a bit more. But we’ve realized we need the $50,000 machine or the $100,000 machine to actually efficiently recycle New Orleans’ glass.

One of the aims of the blog is to talk about addressing needs within a community, and that’s what I love about this. How did that process go, identifying the need and going from there?

I started as an environmental bio major, but I switched to chemical engineering. Basically, my background was always in the environment. I loved recycling and always trying to make better programs for the environment. And Max is from New York City, where they recycle everything. So both of us during our time at Tulane were like, how does the city not - we look at a beer bottle, we finish drinking it, and we really have to throw this away? It’s so substantial. I think a lot of people have that same idea, they just put it aside and can’t throw it away because it’s such a substantial thing. And we were disappointed in the city program and wanted a more robust glass recycling option. So we were like, okay, let’s solve this. Then instead of doing what most recyclers do, which is sell it to someone else or ship it off, we decided we should make a useful product for our coast, because that was the other issue we were seeing. Louisiana is losing a football field of land every 100 minutes. That’s an insane amount of land, and if we could create something that restores that, then why not?

For sure. I love how this project that you’re doing is all for New Orleans. The way you’re approaching it too just feels very New Orleans to me. I’d love to hear you talk a little bit about your experiences in New Orleans, and how that ties into all of this.

So I’m originally from Lafayette, Louisiana, and so have always come to New Orleans as a tourist. And then going to Tulane, it felt like all of the students at Tulane, especially undergrads, also only live in New Orleans as tourists almost, using the New Orleans culture to party or take good pictures or go to these festivals or whatever. And I think when it was nearing the end of our senior year, Max and I were like, are we gonna leave as tourists? Are we just gonna leave New Orleans as if we kind of never lived here? I think we both realized that recycling issue and saw a place where we could help out and actually make an impact on the city where we’ve lived for four years now, instead of just coming and visiting and leaving without ever trying to better it. Not that we’re saving New Orleans recycling or anything, just wanting to improve the place that’s given us so much over the past four years, and wanting to stay here and have a place.

That’s awesome. A similar question, but turning more toward the Gulf Coast aspect of the whole project. How do you understand the relationship between Louisiana and its coast, and why is it necessary to protect it?

In a very direct sense, New Orleans has used - almost exploited - the coast to a big extent, from fishing or tourism or drilling for oil. New Orleans has benefitted from that. Predominantly poor communities live on the coast, and so they’re the ones that are really suffering. I think even a few years ago they had to relocate an entire parish from the coast, but they weren’t given any compensation. They’re just losing their homes because we’re exploiting it to the point that it’s eroding so much. I think that’s that also where the idea of making sand came about. The way we get sand currently is by dredging. We dredge from our coast, we take sand from our coast to put on resorts or to make our skyscrapers. And so being able to help those communities that we’ve taken from for so long.

And a final question: how could one support? Are you still collecting money?

Yeah, we accept donations. We’re launching a Kickstarter soon for a big machine. So you can share that. We need volunteers to help us with a lot of things. We just got a new warehouse so we’re setting things up. Or just share our story, spread the word! Anything helps really.

As always, feel free to send your thoughts to placeloveproject@gmail.com. Also, you can sign up for our weekly mailing list by clicking here - this is the best way to keep up with new Place/Love interviews, essays, and more.